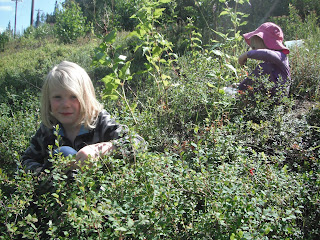 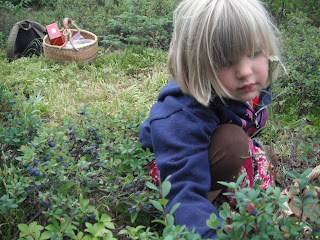 Last week we picked blueberries four days in a row. I picked over seventy cups - and now have over four gallons - about seven or eight gallon bags of portioned out blueberries in the freezer. We are not done picking, but have been taking a break to enjoy the garden and get some things done around the house. The berrries are big and plentiful this year. I'm hearing great blueberry picking reports from everyone. 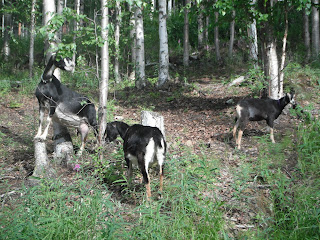 Here are my troublesome trio. Not really, but well compared to all my super amazing, well behaved "perfect" :) goats, yeah. Zinnia on the left, Clary her yearling daughter in the center and Dahlia, right. So far Dahlia is pretty great and I have no qualms with her. Clary is gorgeous, however, the kids and I have been working with her all summer trying to get her less jumpy and better handled, and she is just a flighty thing. My inner goat sense tells me she is not going to make a very easy milker, which is a bummer cause I just love looking at her. I'm thinking about cutting my losses and just selling her, but I've already fed her this long and she's ready to be bred, erg. I go back and forth every day. I have recently become addicted to making more room in the goat barn. It feels so good to cut the herd down to my very favorites and give everyone more room. 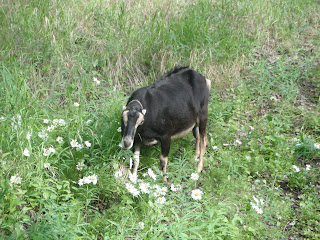 Speaking of favorites. Here is my dear Zuri, who is the best behaved goat ever. She let eight small children take turns milking her recently without lifting a hoof; Best Goat Ever. Zuri has kidded twice without serious complications. She does not have the best conformation with her main defaults being her topline that is not level, and her rump is not as wide or gently sloping. That being said, she has an awesome udder with perfect teat placement and angle, large orifices and great behavior on the milk stand which makes her my favorite goat to milk. 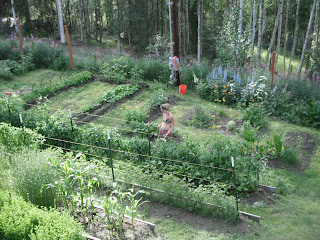 Dustin had a surprise two day weekend. Instead of going on a family boating trip like we fantasized about, nor butchering chickens, which we should have done but are procrastinating, Dustin spent the days chopping firewood and I spent them weed wacking the garden. We spent the evenings with the kids in the garden, mostly playing croquet and watching the geese and chickens get into things they weren't supposed to, their favorite being the corn. 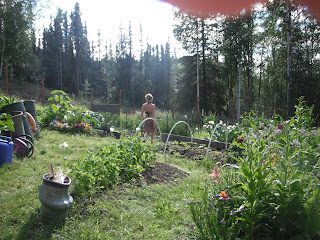 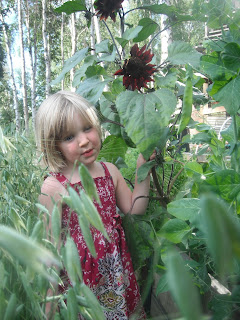 Avery, standing by her sunflowers. 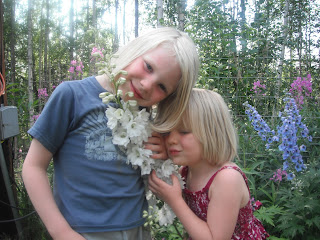 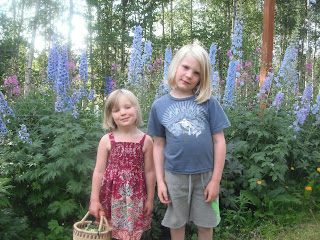 Usually the rain starts right about the time the Delphinium bloom. I've lived here long enough to be really excited about this heat wave the last week in July. We don't always get eighty degree days this time of year. So we are savoring every one. This time of year is usually our rainy time, but I don't see it happening with the current weather trends we've been having. I think we are going to keep getting more sun and heat than usual, which is good as I just can't get enough.

July; the kids and goats, geese and cornish and myself 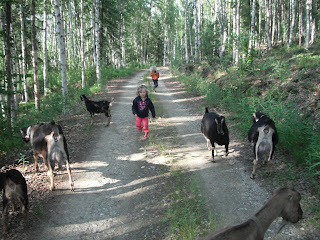 The kids and I have been getting the goats out every few days. These pictures are from a couple weeks ago when the mosquitoes were still pretty bad - which is why we are wearing hoodies and pants even though it was a seventy degree evening. Thankfully the mosquitoes mysteriously disappeared almost overnight after a really buggy start to the summer. 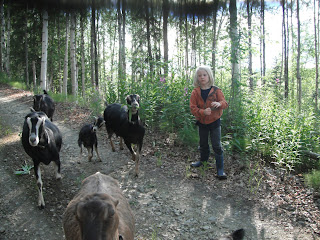 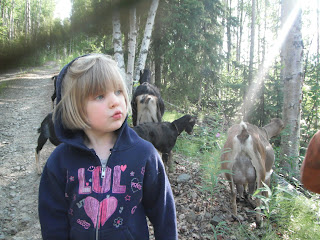 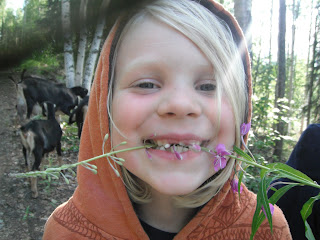 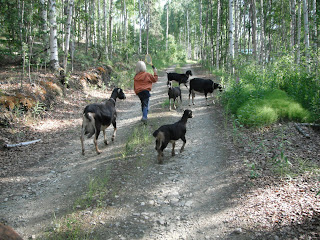 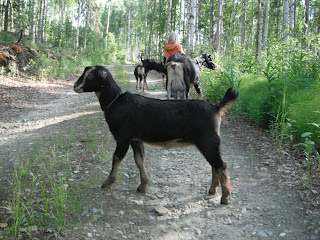 Wild Roots Denali. I was pretty determined to sell this doeling as we have her dam and our super friendly and very nice looking yearling Camelot is closely related... but she is just soooo super friendly, in addition to being a great looking doeling. Today I was rubbing her lower belly and she just couldn't get enough. There is something to be said for super friendly doelings- I'm learning that they are the ones to keep. 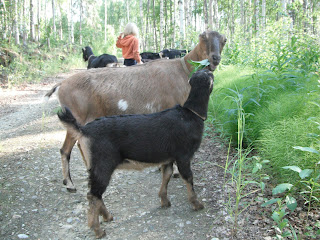 Xanadu and her doeling, Denali. 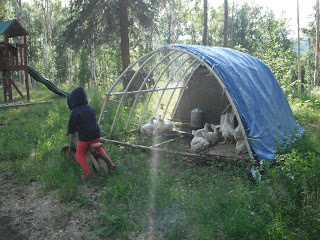 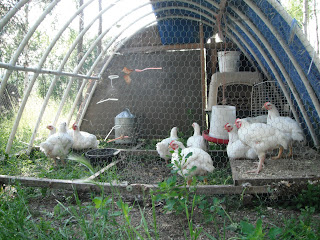 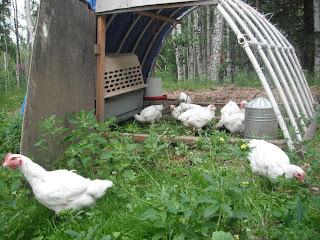 Super happy geese after our first and only rainstorm of the summer. 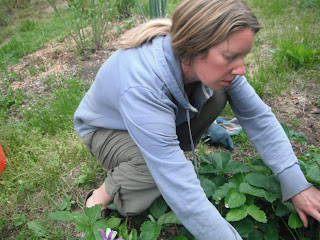 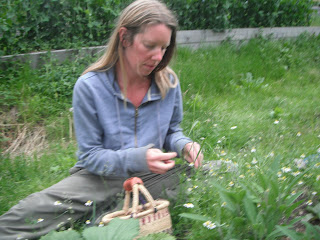 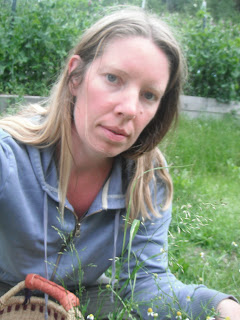 I don't know quite how I feel about these pictures, but here I am.
Posted by Emily at 8:28 PM 2 comments:

All is well here on our homestead. We just had a couple rainy days so I was able to bring myself indoors to tackle some much needed house work. Dustin had a successful dip netting trip to Chitina and brought back thirty Copper River Reds last week. We had a fish processing day, followed by a few days of smoking and canning salmon. The kids were more help than they've ever been - although D and I did get snippy towards the end; ready to just get the job done already. I didn't grow up appreciating Salmon. Then one year we headed to the east coast to visit family and we tried buying and preparing farm raised salmon with our normal recipes - and it was inedible. Needless to say we now appreciate our Alaskan wild salmon immensely. We waste as little as possible. Dustin guts the fish and chops off some of the heads to save on cooler space. After we fillet the fish he scrapes off the back meat and we jar and freeze it for chowder and salmon cakes. We smoke the fatty bellys. He brings back all the row and we put it in the freezer in ziplocs to feed to the chickens throughout the winter. I froze a few heads and carcasses to make fish stock with this year - although I've heard salmon is too fatty of a fish to make good stock. The rest goes to the chickens or into the compost pile.

Dustin had the week off for the Fourth, and we made the most of it. Aside from fishing and processing fish, we made our first hay run down to Nenana for some beautiful first cutting hay and got to visit and tour the farm. Although he would have preferred to be staining the house, Dustin finished building my moveable goose tractor so the geese could live closer to the house. I still need to put up fencing for them before they can be down here for good. He also built me new compost bins, one for wood ash and bones and another for chicken bedding (which the chickens have scattered all over the hillside and is waiting for me to rake up and move) and household scraps. I get such wonderful and practical hand made gifts:)

The garden is taking off- especially now that it has rained. This week we harvested radishes, small zucchini. basil, chives, rosemary and oregano, bok choy, chinese cabbage, tatsoi and leaf and head lettuce, and a few onions that I grew from seed that finished early - they stopped growing at the golf ball stage - which is disappointing. The grain is growing seed heads. The peas are flowering. We also have picked a couple handfuls of ripe strawberries from the garden. Unfortunately we had a lot of die off with our older plants so I've done a lot of work on the strawberry beds but we aren't going to have a good harvest this year. The raspberries are looking really good though, as are the other berry bushes with the exception of the currents which are being attacked by something.

Yesterday the kids spotted the first Boletes of the summer. Noah; my forager/ soon to be hunter/already gatherer, was very excited and traipsed all around the property searching for more. We fried up a handful in pasture butter and sprinkled them with sea salt for an appetizer, before topping homemade pizza with our own fried zucchini and onions.  A friend dropped off some rhubarb the other day, and I made rhubarb muffins this morning. Let the harvest begin!

Our multi species walks have been put on hold lately. Our doe Xanadu got into a couple squirmishes with the geese and now they seek retribution with any and all goats. I wish I'd gotten pictures of our earlier more peaceful walks before the kids started hanging on me and using me as a barrier from the geese while the geese simultaneously chased off the goats- except for Xanadu who tries to head but the geese into the ground. Do any of you know the book Thundercake? I love it, and think of it often with the kids, goats and geese are all walking together. We have been waiting all summer for a thunderstorm (not that we want more fires), but I'd told the kids we'd bake a thundercake as soon as we get a thunderstorm. Well, June is usually our month for thunderstorms, and I'm thinking we might have missed them altogether. I feel like we got cheated out of our early summer excitement.

There have been some serious fires going on in the Interior - none that have threatened us, but a lot of folks and a lot more farm animals on Chena Hot Springs have been evacuated this week due to a fire. Thankfully the rain has helped. My heart goes out to all the families that had to leave their homes and move their animals to and fro this week.

The days have been full from morning till bedtime with lessons, house chores, and then garden and animal chores all afternoon. By the time the kids go to bed I have about an hour to myself. Instead of getting on the computer I've been putting up my feet and reading Diana Gabaldon's The Fiery Cross. I have been reading and re-reading her Outlander series for years now and highly recommend it. She has a new book coming out this fall, and in anticipation of it I'm re- reading the last three books in the series - which I've read much less than the first four.  I feel like July is a bit of a lull, planting is mostly over, we get a break from all the watering we had to do in June, the animals and vegetables are all growing and growing, and the intense harvesting and putting up is yet to begin. So, maybe you'll hear from a little more over the next few weeks.
Posted by Emily at 9:29 PM 4 comments: