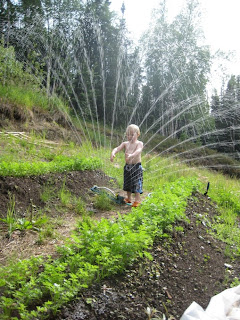 Dustin came home with a sprinkler last week. Noah enjoys garden watering time now more than any of us. Today he was asking to water the garden but it rained last night and today so there was no need. We have had such hot weather that we've all been running through the sprinkler.

On a side note the sun is setting at this very moment, 11:18 by my computer clock. It is a hot glowing orange sinking behind the blue ridge-line. The sky closest to it is salmon spreading into lighter shades of pink. I enjoy this time of year as well as this time of night so much. My kids get to bed just in time for me to sit at our west facing window and watch the sun set while I sit at the computer munching on forbiddables (a word of my own making apparently). The sun setting this early is a sure sign that we are approaching the later stages of summer, yikes! We won't get any dark nights for a few more weeks, just dusk. I can walk around our property at any time of night and see clearly until early August. Then it will take a while to get use to carrying flashlights and driving in the dark again. Ah...

On a brighter note, the harvest is approaching full swing. This week has me pulling out my favorite cook books looking for recipes that use large quantities of greens. One of our favorites is a green soup that Dustin calls pureed salad. It is tasty and I throw in any greens that I have, and garnish it with homemade croutons and cream, or sometimes fried scallions. The original Deborah Madison recipe calls for sorrell which I didn't have when I first started making it but I grow it now and at the moment have an abundance. Other greens abounding include swiss chard, beet greens, head lettuce, baby salad greens, tatsoi and other mustard greens. I also harvested radishes, herbs and garlic whistles. We've been snacking on baby carrots and snap peas but none have made it down to the house. Every time Noah is in the garden he asks what we can eat. Tonight we also had some fresh broccoli. Some of the heads are about as big as they are going to get. We finally have some zucchini growing (it got off to a slow start). We have lots of green tomatoes and have eaten some cherry tomatoes.

I have been gearing up for this statement: I will not be purchasing any out of state vegetables for the next three months! We will try to eat mostly out of our own garden, but may also purchase a few things at our local farmer's market. I will be bypassing the produce section at our local supermarket. I could probably commit to eating local veggies until November or even December, but we may be taking a vacation in late September. In the last couple years I've made this commitment sooner in the summer, but once again I blame our children. Beings that up until now we've mostly just had greens, Avery loves her peas and green beans and Noah's favorites are cucumbers and broccoli...so I think we will be in the clear for a while as far as kid veggie preferences go. 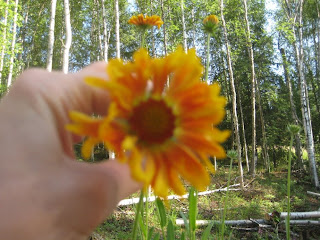 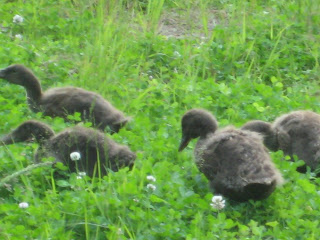 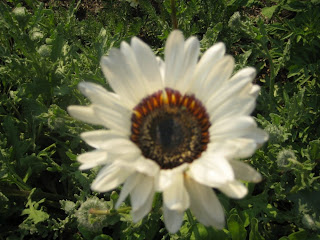