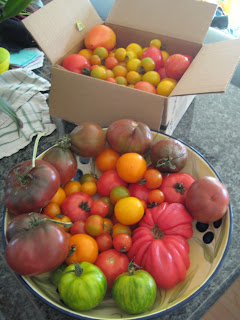 I am beginning to feel just a tad bit overwhelmed with tomatoes. We picked seventy pounds of green tomatoes a few weeks ago and they've gradually been ripening. Every few days I sort through the boxes and put the ripe ones in what has become the tomato bowl. Well then there was the bowl and a small box of ripe tomatoes, and then two boxes. I tried making sauce last week. It was the first time I've ever dunked tomatoes in boiling water and skinned them before chopping them up. It was a lot of work and I'm not sure the results were worth it or not. I had some paste tomatoes but a majority of red slicing and beefsteak tomatoes. For the last few days most of the tomatoes are heirloom and cherry tomatoes. We've got a small box of sungold cherry tomatoes. We've also got a couple nice looking Black Krim which I'm saving along with a Pink Accordian for a special tomato tart recipe. Other varieties in the bowl include Green Zebra, Ida Gold, Black Pear, Orange Russian and numerous red tomatoes of all shapes and sizes.

I've been chopping up tomatoes and serving them with garlic and olive oil (add cilantro and lime for salsa) with almost every meal, on top of salads and pasta, in tacos, with chips... I had been meaning to make and can some green tomato jam but it just hasn't been high on the list. In the past I've canned pickled green tomatoes but I still have some in the pantry. I've been holding out to begin dehydrating tomatoes. I figure that there are still a lot of tomatoes to ripen and the later ones won't be as good so I'll dry those. I'd like to have at least a gallon of dried tomatoes going into winter. There are a lot of plain red tomatoes ripening so I'll either be doing a lot of drying or some more sauce making. If it were warmer out I'd be making gazpacho or chilled tomato soup, but they've lost their appeal with the fall weather.

I'm almost burned out on our favorite easy fresh tomato pasta recipe which goes something like this:
1. Chop up a bunch of tomatoes, two to three pounds.
2. Add 1/4 cup olive oil and salt and pepper to taste
3. Chop up a mix of herbs, basil and parsley, maybe some oregano
4. Let the tomato mixture sit as you bring water to a boil for pasta
5. Boil pasta according to instructions, we usually use spaghetti or angel hair for this recipe.
6. While pasta is boiling grate parmesan, sometimes I pull out some capers or kalamatta olives
to add some extra kick, but certainly not essential to the recipe.

Last of all toss it all together and taste for salt once more. I usually stir some parmesan in and top with some as well. Serve alone or with buttered toast or salad. A light to medium red wine is nice, nothing so bold that it overpowers the meal. This recipe is quick, easy and fresh. We make it several times over the course of the summer. The tomato juice and olive oil combines to make a very nice sauce.

Well, it is October and we finally have a plethora of tomatoes. It has been a long wait. We no longer have our own fresh cilantro or basil so I just broke down and bought some cilantro from the store. We go on vacation in a few weeks so we'll be eating as many tomatoes as we can stand for the next couple weeks and then I'll dehydrate the rest. If anyone has any great tomato recipes that are not too time consuming and use up lots of tomatoes let me know. Tonight we are having navajo tacos with refried beans, cilantro coleslaw and tomatoes. Tomorrow I'm thinking pizza with the cooked tomato sauce and fresh tomatoes on top. We have a favorite tomato tart recipe that I'll be making soon. It has a rich parmesan crust filled with tomatoes, fresh basil. capers and kalamatta olives, mmm.
Posted by Emily at 8:36 AM

So I like to use up green or partly green tomatoes in a taco sauce. It's like salsa but it's cooked and pureed so you don't have to skin anything. I take a gigundo canning pot and fill it two thirds full with green or partly green tomatoes, cores removed. Not skinned or seeded or anything. Then I add as many chillies to fill up almost to the top, seeded and cored but not peeled. I always get a bunch of anaheim type peppers and assorted others that don't get to grow all the way. Then add an onion or two and a good half cup of peeled whole garlic cloves. Add water to fill half way, cover and simmer a few hours. The tomatoes rupture on their own, the peppers soften and everything mushes up. I use a submersion blender to blend everything into a thick sauce, then add salt, sugar and vinegar until it is nice and tart. The green tomatoes give it a nice tomatillo like tartness, and the peppers aren't too hot as they haven't ripened. If it seems too spicy, don't worry the hotness mellows over a few days. I end up adding at least 2 cups of vinegar to a big batch so the acidity is fine for water bath canning. It's great over any mexican style dish!

Aubryz, thanks for the recipe, sounds tasty. I might make a small batch, as my tomatoes are turning red and I'm running low on green tomatoes. I tried to publish your other comment...not sure what happened, sorry. Are your kids about the same age as mine?

Ours are 3 and 15 months. I showed my husband your photos and he was pretty surprised at how much they looked just like ours! in the same tackle position too! They are in a few photos on our blog aubryz.blogspot.com. My husband is from upstate New York and said your home photos reminded him so much of his childhood home. We love our home but it is so crowded in suburbia. Someday we'll have that cabin/farm!