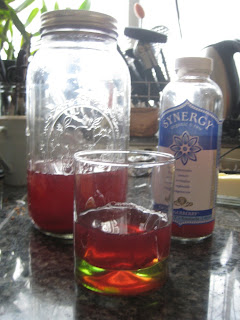 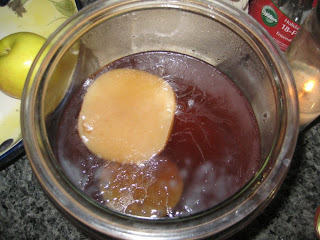 SCOBY is what many call this mushroom like pancake that grows on the surface of kombucha tea. SCOBY stands for symbiotic colony of bacteria and yeast. It is scientifically classified as a Zoogleal Mat. Others call it the mother as it grows, multiplies and divides during each brewing cycle. In the photo above I had taken a couple baby scobies from a brewed batch of Kombucha and put it in a fresh crock of tea. This photo was probably a five days to a week along, you can see two babies, one on the bottom and one on the top. The one that surfaced is growing a scoby the size of the crock diameter. Within another week it will look like the picture below, solid. The baby probably stayed on the bottom of the new scoby and I most likely pulled it off and discarded it. I usually just feed the extras to the chickens, but they are supposedly super healthy if you can bring yourself to eat them. 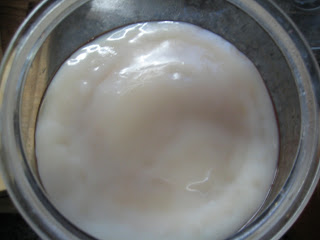 The scoby above is a fresh young healthy looking specimen. The scoby below is also fine and normal but is older. I've had them grow up to three inches thick at times when I wasn't tending them regularly. Generally I don't let them get much thicker than the one pictured below. Depending on how the mother looks, sometimes I'll discard the top layer and keep the newer growth on the bottom. 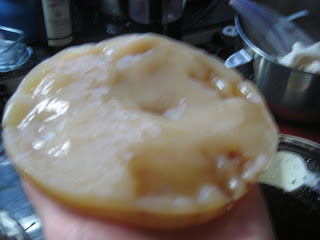 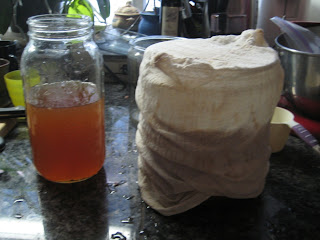 Above is the finished product jarred, and ready to sit at room temperature for a few days to carbonate before heading into the fridge. Below is a picture of a mother that has divided on it's own. 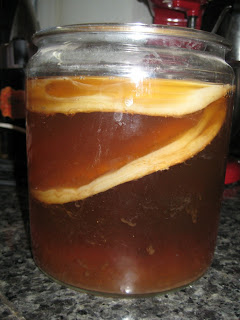 So you have gone through all this work and don't enjoy your healthful tonic, well never fear there some extra measures to take. Well, first of all play around with brew time, carbonation time. Shorter durations of brew time make for a milder flavored beverage are most likely less effective. Chilled kombucha fresh out of the fridge is best. Also, you aren't suppose to be drinking a pint of the stuff. I started out drinking an ounce or two, now I usually drink a four ounce glass at a time. I started reading labels of all the kombucha drinks at the store. They usually contain tea, kombucha cultures and fruit juice. So you can try adding different juices to your finished product, or jam, (whisk and strain), or as I've been doing add berry, fruit or herbal syrups. The combinations are endless.
This is one of my most recent batches of kombucha tea ready to sit and ripen for a couple days. I've been experimenting by adding homemade raspberry and blueberry syrup along with fresh ground ginger root to the brewed kombucha. Once I have all of the kombucha in jars and the scobies are in a fresh batch of tea, I pour about a quarter to a third of a cup of berry syrup into the tea, grate a teaspoon of fresh ginger and drop in and shake. I open the jars each day and taste them to see if they are carbonated to my liking. When they are I put them in the fridge which slows down the carbonation and fermentation. I am going to start filtering out the ginger root, but I haven't gotten around to that yet. If you leave your jars sit out for too long without checking on them they could technically explode from the gas build up. They will also start growing a new mother and you'll get all kinds of phlemmy like chunkies in your tea, mmm. 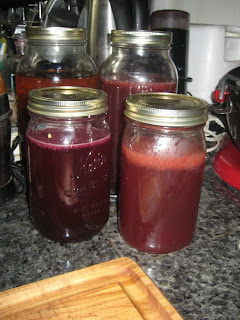 Final thoughts: for best results drink on a light or empty stomach. I have gotten to the point where I've started craving kombucha tea if I don't have any for a while. Seriously, the next time you feel a sore throat coming on start gargling with and drinking kombucha. I find that a two week brew time is just right for my tastes. Depending on your room temperature and tastes that may change. Once you are brewing, there are all kinds of other things you can do with kombucha tea, including making your own vinegar (just let it keep sitting), feeding it to your pets, putting it into smoothies and I've even heard of bathing your skin or wounds in it for skin health and speedy healing. (I wouldn't recommend putting a fresh serious wound into it). Finally, if you've never researched Kombucha before and you are now thinking of brewing some, I'd recommend that you do some more research, can't have enough knowledge before embarking on a new and exciting adventure. I'd be interested in hearing about other uses for kombucha tea, other recipes and your stories whether successful or not. Happy Brewing folks.
Posted by Emily at 10:42 PM

I am enjoying your blog. We too have made our own kombucha. We rebottle it in smaller glass bottles that we have saved from other beverages. Makes it more convenient to grab a small bottle and go.

Hey Farmgirl, I've just started doing that as well. I don't know what it is about bottling and packaging, but it seems to elevate the beverage and making it seem more special when I'm drinking out of a nice bottle.

Hello,
I love your blog, I learn many things. I also have some goats and chickens, I preserve my vegetables and I make my comets and soap too. My goal is to become self-sufficient as possible.
I will return often to read
Sorry for the mistakes but my English is not very good ...
Josée

We are Kombucha "addicts" around here to.
Love the stuff.
We rebottle for the secondary ferment, in ez cap bottles.
Favorite flavor is peach.
But we do cherry, blueberry, ginger and strawberry as well.

Josee, glad you found me, looking forward to hearing more from you - sounds like we are on similar paths.

Steve and Paula, peach sounds great! Do you sweeten your kombucha with juice or syrup?

We do not sweeten it at all.
Just a teaspoon of friut for flavor is all it needs.
And we avoid juice, as its just pure fructose and very hard on the liver.
:o)

Thanks for your honesty with the Kombucha, I am new at making my own, have made one batch already and my next batch should be ready tomorrow or this weekend. How do you grow more Kombucha scoby's and are they mothers or babies? I want to give one away to a friend. Thanks!

Kimberly, over time your kombucha mother will grow in thickness and eventually separate into two. You can give this to a friend. You can also pour some of your tea into a jar and leave at room temperature until a new scoby begins to grow. I believe I cover this process in the post.

Do u think I could use the scoby from my ac vinegar to make this drink? Thanks :)

Jen, what is ac vinegar? If it was started with a kombucha scoby, then probably. Just skim the scoby off the surface and put it in some sweet tea with some of the vinegar. If it is some sort of other vinegar with no kombucha in it, then no.

I want to make a gingerberry just like Synergy...How do you make the berry syrup or whatever you add to the tea? thanks

I usually use less sugar. Maybe a cup, maybe a half cup. This year I didn't make any syrups, but I need to. Lately I've been grating ginger and squeezing fresh lemon juice into each bottle. If you don't like the ginger let it sit with the kombucha for a couple days and then strain it out and bottle it. If you do make the syrups, play around with quantity, I find that a couple teaspoons and up to a tablespoon is about right for my taste, per sixteen ounce bottle. I've made some changes to my old practices to get the kombucha more carbonated. I've been changing the kombucha brew every seven to ten days, then bottling the kombucha in old beer bottles with the rubber/porcelain tops - I can't remember what they are called. but they work really well. I leave them sit at room temperature for a week and then into the fridge. They are milder, just a bit sour, lightly sweet and very fizzy this way.