Zinnia went into labor on Tuesday night and kidded Wednesday afternoon; day 149 of her gestation. This kidding was much anticipated by myself, given that she has not been able to kid without assistance yet. I've written about all the uterine toning herbs I've been giving her in hopes that she could do it on her own this time. As much as I wanted to give her a chance to do it herself, I ended up going in once again as her labor seemed to be sporadic and again, not progressing as it should. When I went in I found two front legs upside down, no head. The kids were in the same position as last year with their necks turned back alongside their bodies - which has got to be the most frustrating and problematic kidding position and I just dread it.

As the kid was upside down, the neck was down to the bottom left and I couldn't even reach the head. I was trying to get my hand on the inside of the neck to pull the head around but just couldn't. I ended up panicking a bit and just pulling the kid out with the neck still turned back. It was a buckling and he was very weak. I revived him with cayenne tincture on his gums and chest and lots of rubbing and determination. The second and last kid was in the exact same position as the first and I couldn't get that head turned either. At some point I just don't care if the kids make it or not,  I just want them out and I want the doe to be ok. Although once they are out I wish I'd taken more time to try. I don't know why I haven't invested in a head puller by now, but it is on the list for next year.

The second kid was a doeling and was in good shape. 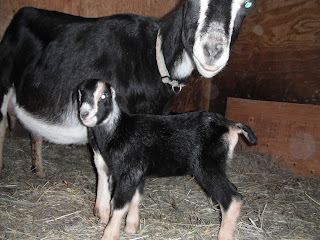 Zinnia and her doeling, Dahlia, still a bit wet but standing. 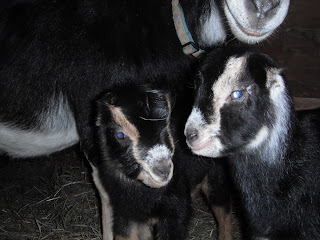 Both kids, buckling on left.

The buckling was alive but not gaining strength very well. I had to pry his mouth open to squirt milk down his throat. For a while he seemed to be doing better and was starting to suck and nurse with help. I limped him along for two days before bringing him inside to nurse him, but he died on Friday morning. My guess is that something was damaged internally from the rough lengthy kidding. I had given him cayenne tincture several more times and it would give him a kick start but then he'd start to peter out again. So once again, Zinnia has one doeling to care for. 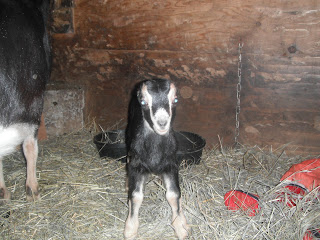 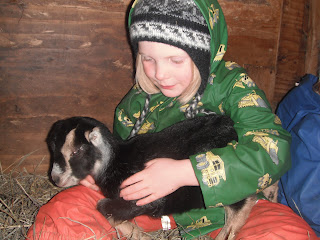 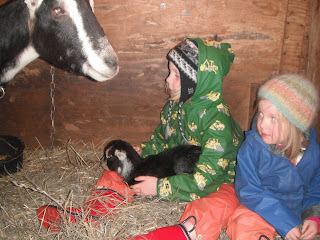 I'm beginning to think I have the worst kidding luck ever; in the past six years I've had three kiddings where the first kid or kids were upside down with their heads back, but then as Zinnia has been the culprit the last two times, I'm beginning to think maybe there is something wrong with her; maybe the shape or size of her uterus makes it prone for kids to be in the wrong position? I don't know. But I do know that I am not breeding this doe again. I want easy kidders. I don't even feel comfortable selling her to anyone. She is a beautiful doe, make lovely babies, she is a good mom and a good producer, but that is all the positive I can say about her.

I'm planning on milking Zinnia for a few months or more. I have Zinnia's doeling Clary, from last year and she is beautiful. Dahlia looks like she is also going to have lovely conformation as well. There is part of me that wants to keep the Rose/Zinnia line in the herd, but I am reluctant to keep kids out of a doe with kidding issues. I'd really hoped that Zinnia would impress me with an easy kidding, but it was not to be. When the kids are in a difficult position like that they cannot come out on their own. I'd like to think that if they were in the correct position she could have done it on her own, but I'm not keeping her around long enough to give her another chance, she just isn't a friendly or sweet enough doe.

Fortunately my next doe to kid is Xanadu; who has kidded four times and never had any difficulties - with the exception of her first kidding where she had a big buckling head first and it took the vet to get him out as I was inexperienced at goat midwifery. Xanadu is the sweetest most wonderful goat. The entire herd will be browsing in the woods, but Xan will be wherever I am. Over the years Xan has had seven bucklings and two doelings, one was Avalon who is a wonderful goat that I sold recently. I've always wanted Xan to have a doeling that looks like her - she has had three bucklings that have had her coloring. She is due May 19th and is huge already. She has had triplets her last two kiddings. I'm hoping for strong healthy kids and an easy labor.
Posted by Emily at 9:22 PM

An At Home Daughter said...

What adorable babies. I love LaMancha's.
Sorry for the loss. We have had that happen before. I have found that the best thing to give them soon after birth is 1 capsule Vitamin Code brand (human vitamins) Vit. E, mixed into some raw honey in a syringe. The honey is so thick they can't spit it out, and are forced to swallow. the capsule contains natural plant based vit. E, Selenium, and other things. It seems to work a lot better than the injectable stuff from the vet.
Hope this helps.

I am sorry to hear that Zinnia let you down again. It's so frustrating to wait five months and then have something bad happen at the last minute. I do agree with you that Zinnia needs not to be bred again and probably her line should be removed from production. I find most of my does follow the same kidding routine each year so if one consistently has trouble (two years in a row), I send them packing (to the meat packing plant). My one doe always waits until day 155 to kid and then has trouble pushing her enormous kids out. I have kept her because the kids are always in good condition when they finally come out (I usually help pull the first one a little) and she is very predictable at kidding and milking.

Good luck with the rest of your kiddings!

Darn, sorry you lost the buck. :( But at least the doe lived. I agree about Zinnia. Sad, but what will happen the one time you're not able to be there? Hard choices. I have a doe due to kid this month (May) who has a pretty small rear end. She freshened for the first time last year with a HUGE single doeling that was totally stuck. I was afraid I'd break her pelvis. But the doe was young and the kid was really big, so we're giving her a second chance. But problems this time, and she's in the freezer. Reality sucks sometimes.

My girlfriend just told me about your blog. She found you on the Alaska Blog Network. Her blog is "By the Creekside" and mine is "Our silly old lives". We are much alike except I can tell you know much more about goats than I do. We homeschool in Wasilla and have a LaMancha and two Nubians that we purchased from MyKids Farm. My friend Amber at the creekside blog also has 2 LaManchas. She's my neighbor. I'm dealing with tough goat decisions right now and just decided to get rid of one of our Nubians, she's very hard to breed and we don't have a buck. I never knew they would be so difficult. Our LaMancha did great a month ago with her first kidding but she got mastitis in one udder before her kidding and now I don't know if she's ruined for good. :(

I've never had a severe case of mastitis so I'm not sure why you'd think she was ruined. Is her teat lopsided? As far as your Nubian goes, how old is she? My Lamanchas are most obvious from October to December. If they are older than two and have never been bred, they don't tend to come into heat - a good reason to make sure they get bred their second year if not the first. Best wishes to you. I'll check out your blog.