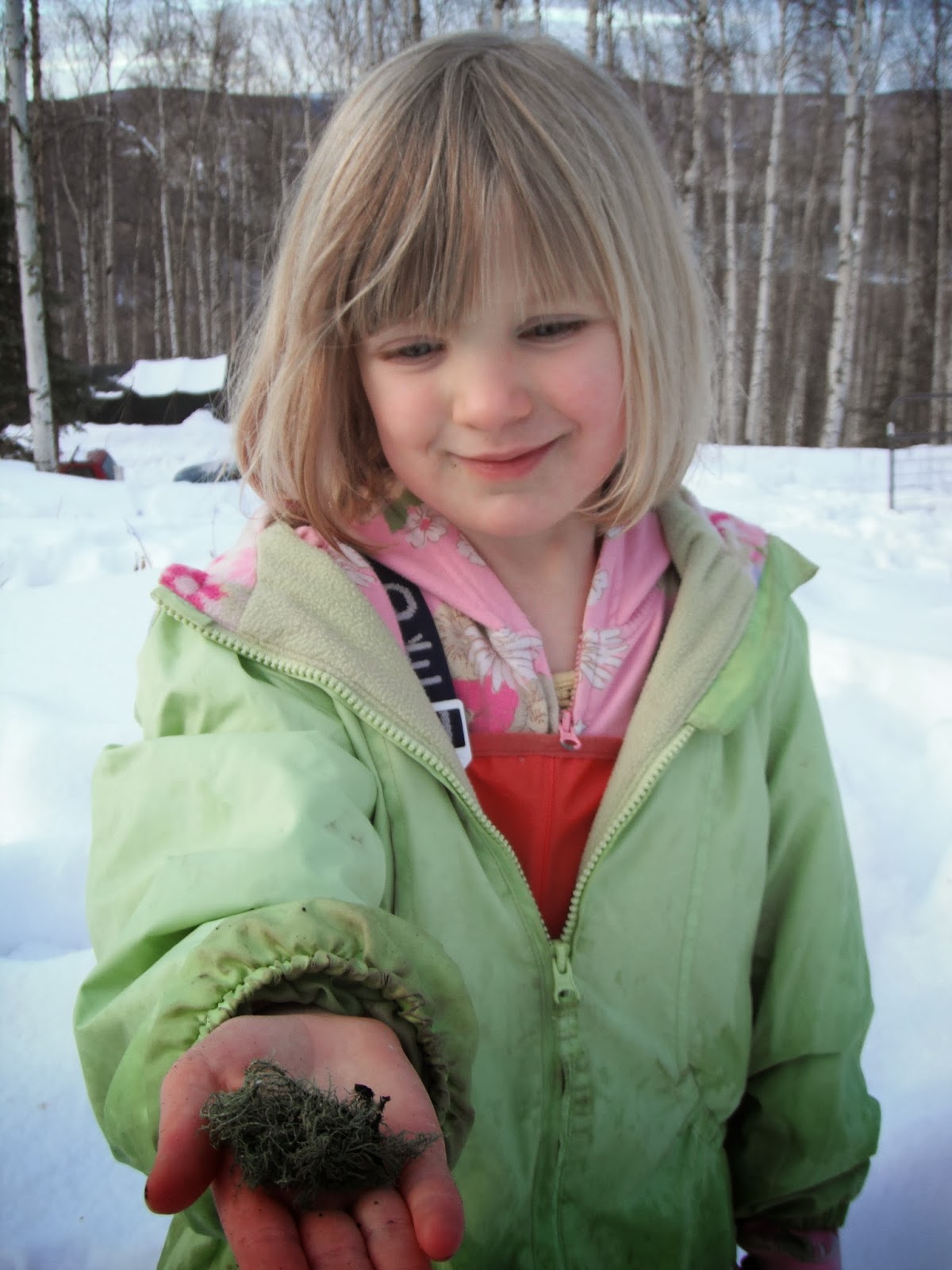 We have had the craziest warm week of weather. April weather in January to be precise. The kids, the animals, and I, have been making the most of it. We trimmed goat hooves, cleaned out a chicken coop, let the goats out every day for walks. The geese got out and perched on the front porch for a day, leaving lots of green presents behind; frozen goose poo, lovely. Surprisingly the rain gear was easily accessible. Yesterday Avery came running up and exclaimed that she had found the first green sign of spring on the ground. Maybe I shouldn't have, but as gently as I could I pointed out that the Usnea that grows on the Birch, stays green all winter and that it must have fallen to the ground. She brought it inside and we put it on our nature table along with the dried plant bouquet she collected earlier in the week. 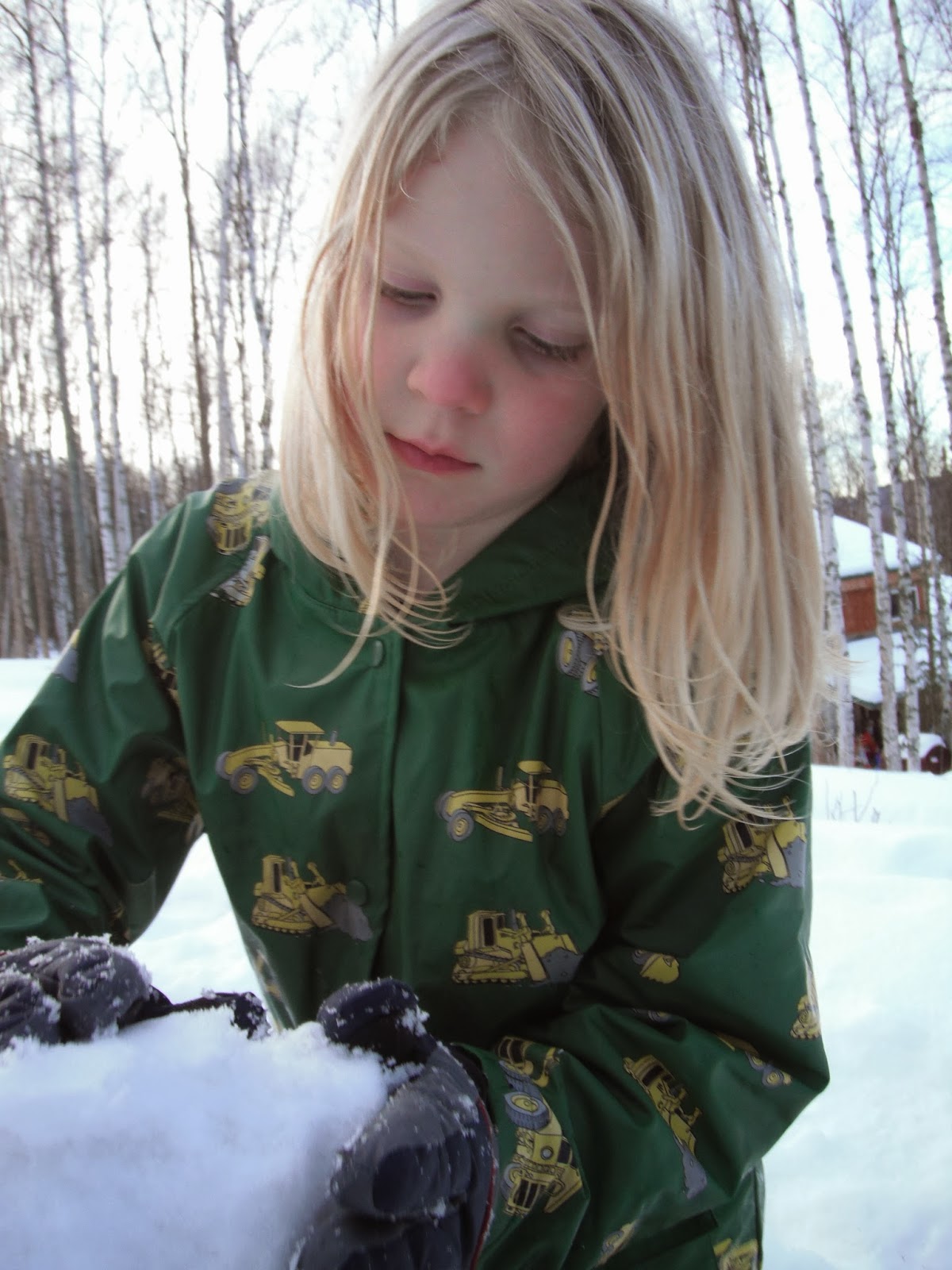 We enjoyed rolling snowballs, making a snowman and having snowball fights, as usually it is too cold and dry here for snowballs. So we only get a few chances each winter to roll snowballs, and usually that is in April when the excitement of the snow and winter play is long expired. 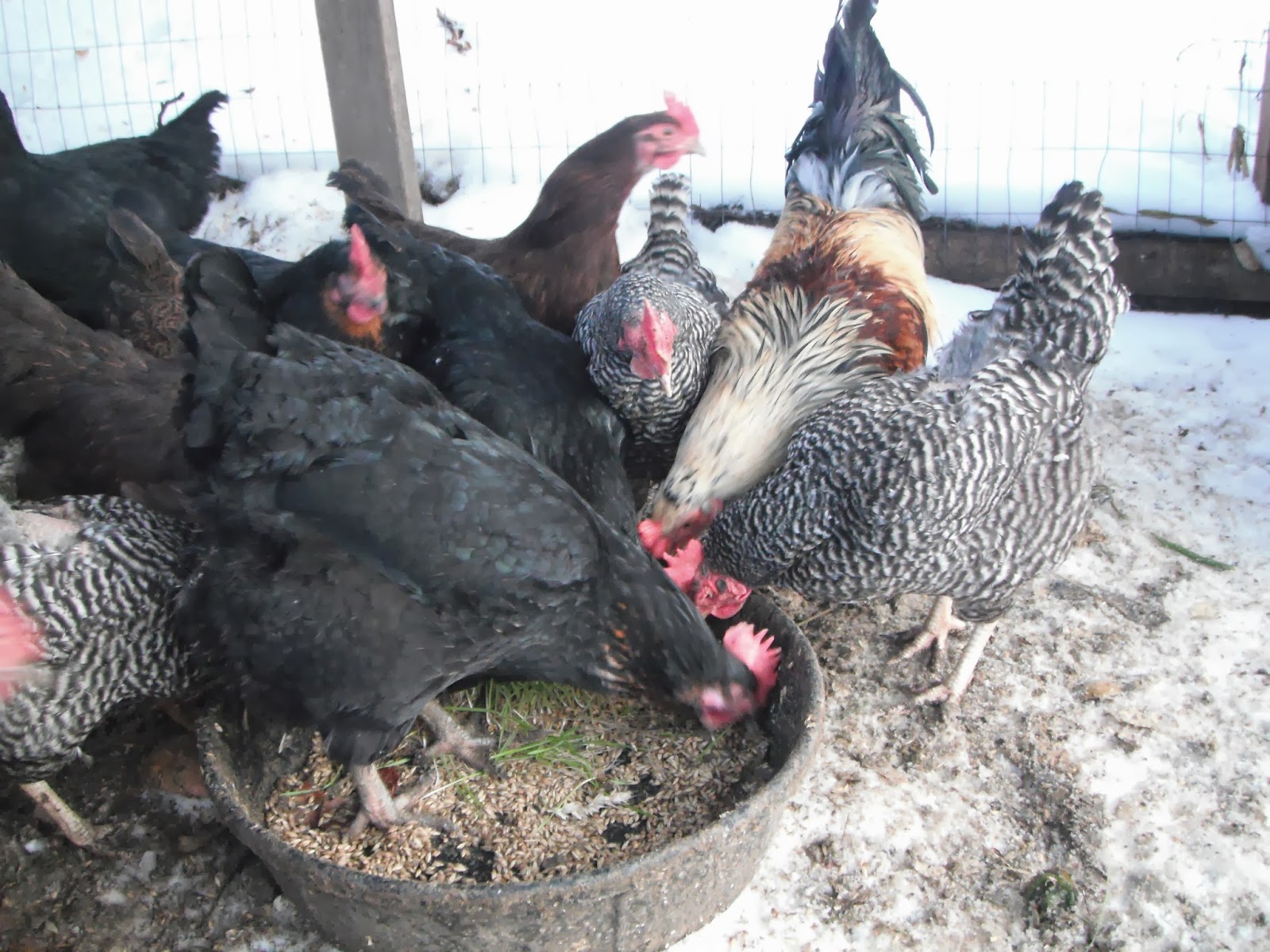 This year we have more chickens than usual, mid thirties instead of the low twenties we usually keep. As a result we noticed the eggs looking much more yellow and less orange than most winters. As their grain mix was the same if not better than past winters we concluded that the only change was that the chickens were getting about half as many scraps as usual, give the larger numbers. I've also been reading about milk, eggs and meat from animals eating fast growing grass has significant levels of fat soluble vitamin A and D. Well, we are never going to have winter pasture here but I thought I could at least grow some wheat grass indoors. So I've been keep three trays of wheat grass growing on the floor by one of the French Doors. It grows well without any artificial light. I could use a couple more trays going, but it has been enough that more days than not I have wheat grass to take to the chickens. They love it. As a result we've noticed the egg color deepening. I hard boiled some eggs for a salad the other night and they were the lovely sunset dark orange with dark salmon rings at the yolk edge; beautiful. 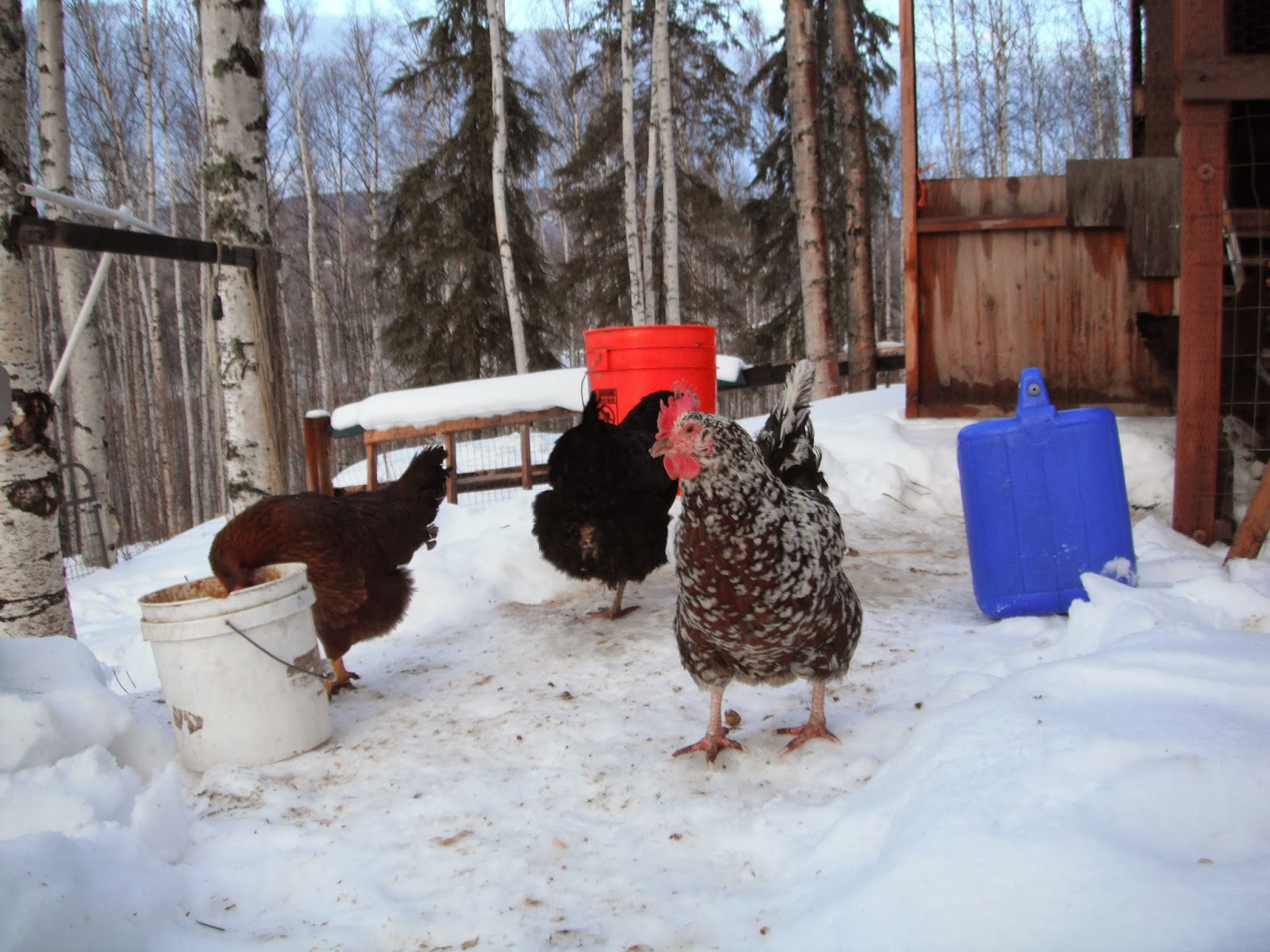 Yesterday while mixing a batch of chicken feed, we let the girls and the roo out for an adventure. 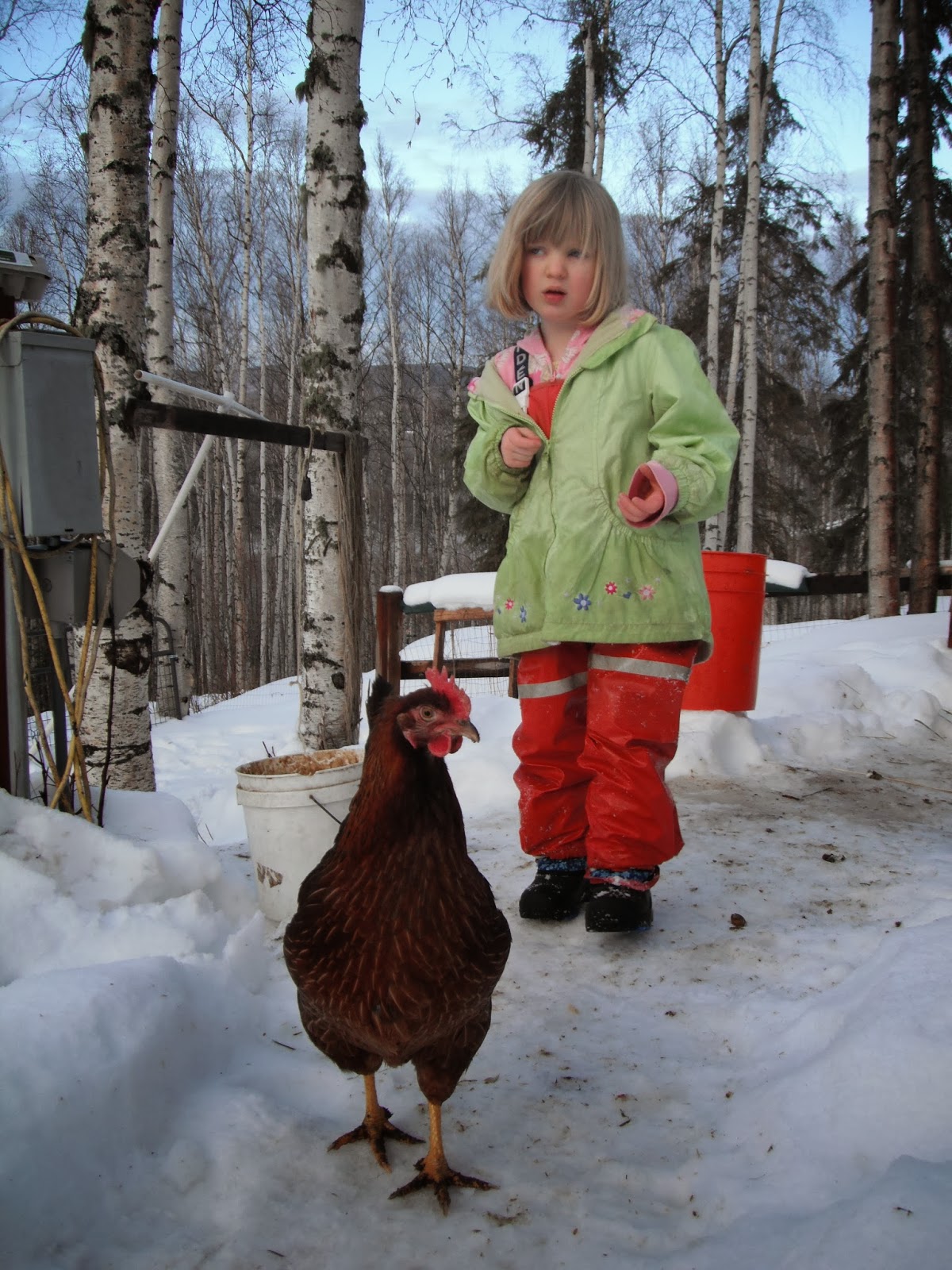 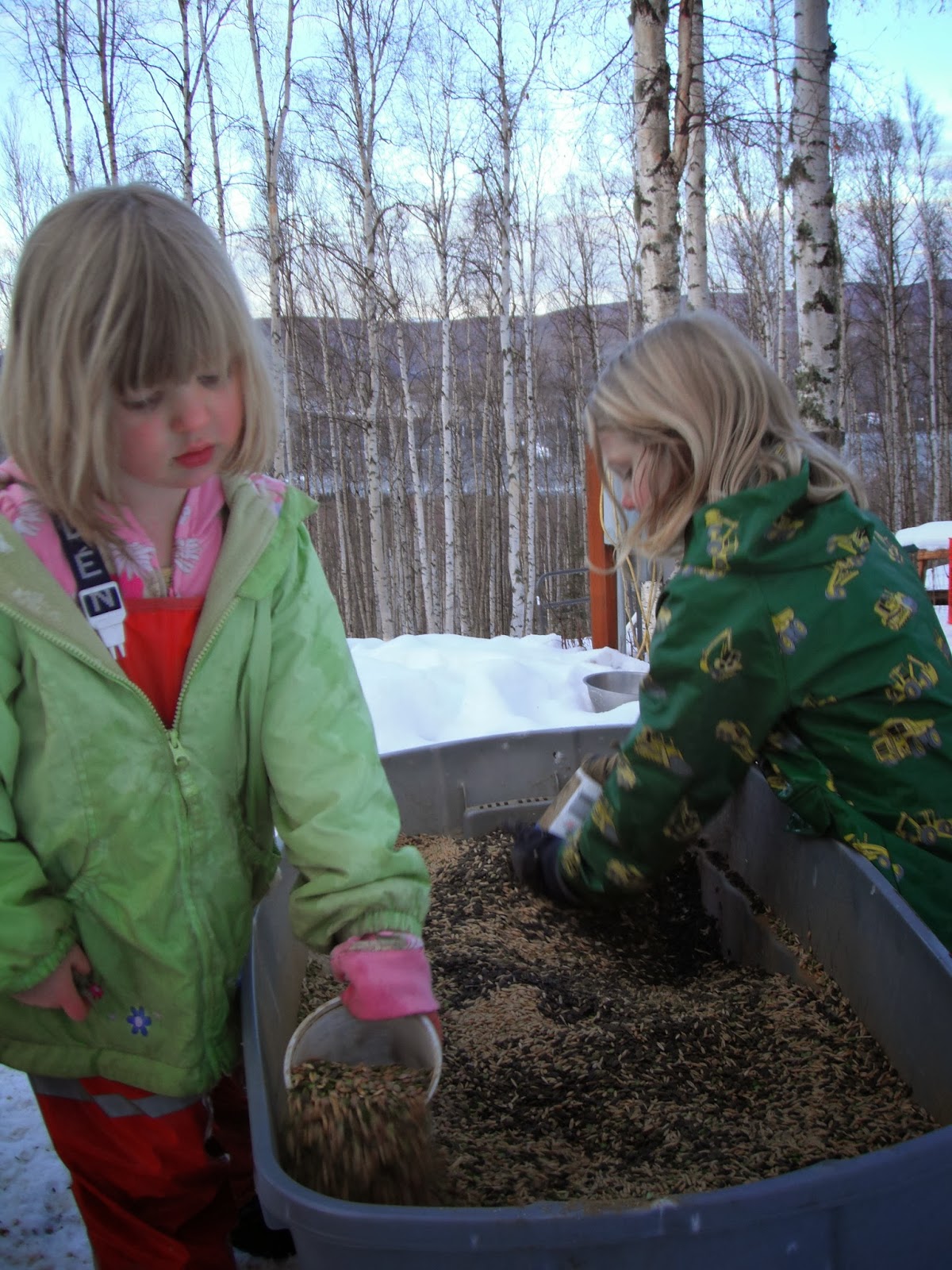 Always a good job for the kids. 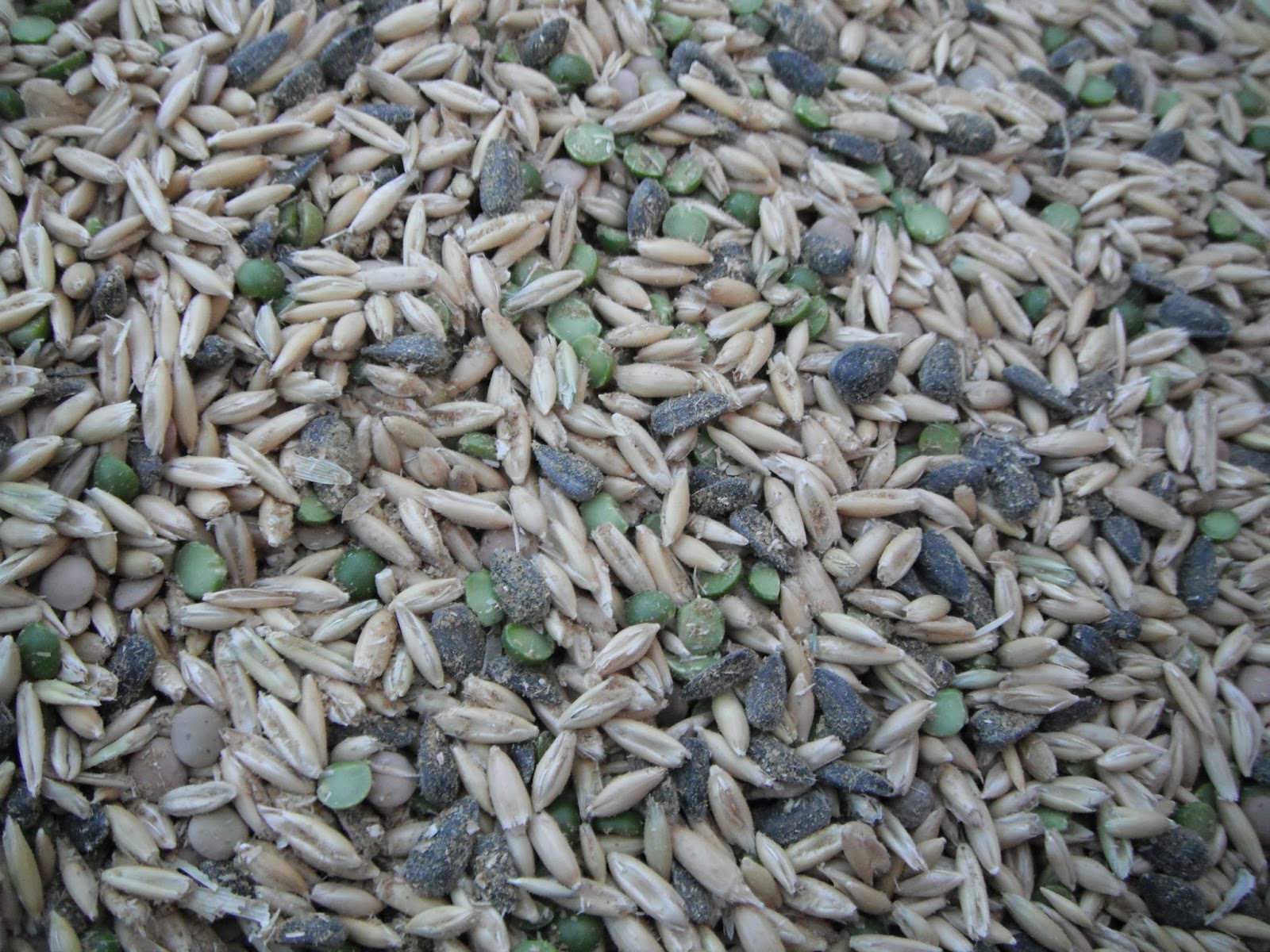 This was an impromptu batch of feed. I hauled up a twenty pound bag of split peas on one shoulder, carrying something else in my other hand. I was too lazy to walk back down and take off my boots to go inside for the organic whole corn I usually add and the wheat berries that were on the porch. So this is a fifty pound bag each of whole barley and whole oats, 10-ish pounds of BOSS, 10 lb. of lentils, 15 lb. of split peas, a half pound of salt or so, 4 lb of Alaska fish meal, 1-2 lb each kelp and nutritional yeast. If you ask me why the particular quantities, my answer would be that it looked right. I use to follow a recipe and at one point I did some research. The chickens will go through this batch of feed in about 10 -14 days. Maybe I'll be motivated one day to carry up some corn one day for a bonus. I don't usually leave the corn or wheat out. The chickens waste the oats and barley if I put too much in as I did yesterday. There was way more grain on the floor of the coop today than usual. So I'll let their feeder stay empty to encourage them to clean most of it up. They love the lentils, peas and BOSS. As our egg color indicated this winter, this feed will be enough to keep the chickens looking good through the winter, but is not enough for beautiful orange eggs without the addition of something living. In the summer they get this feed but they also forage, making for the best eggs of the year. 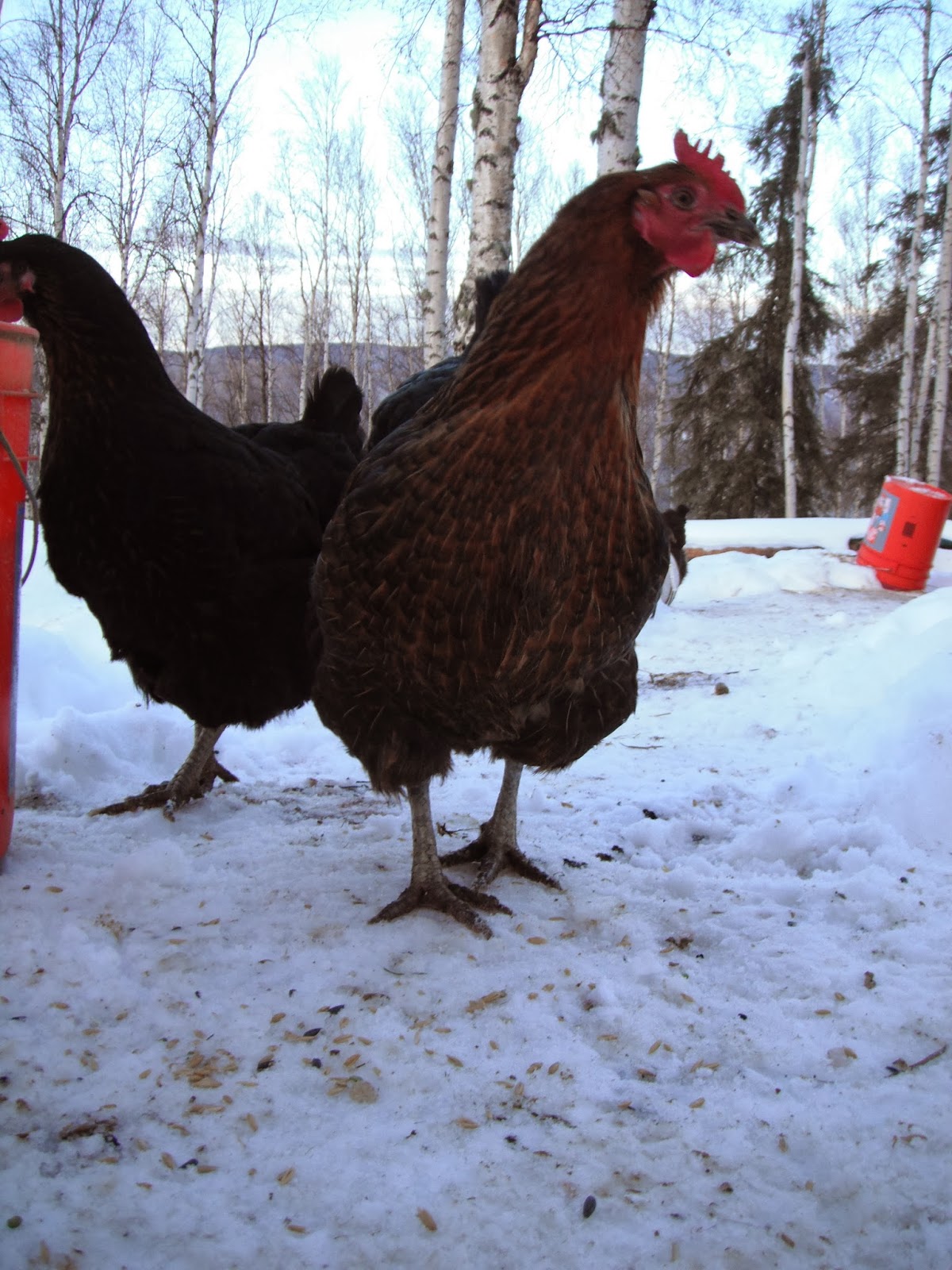 The hens enjoyed cleaning up the grain the kids had spilled while mixing the feed. 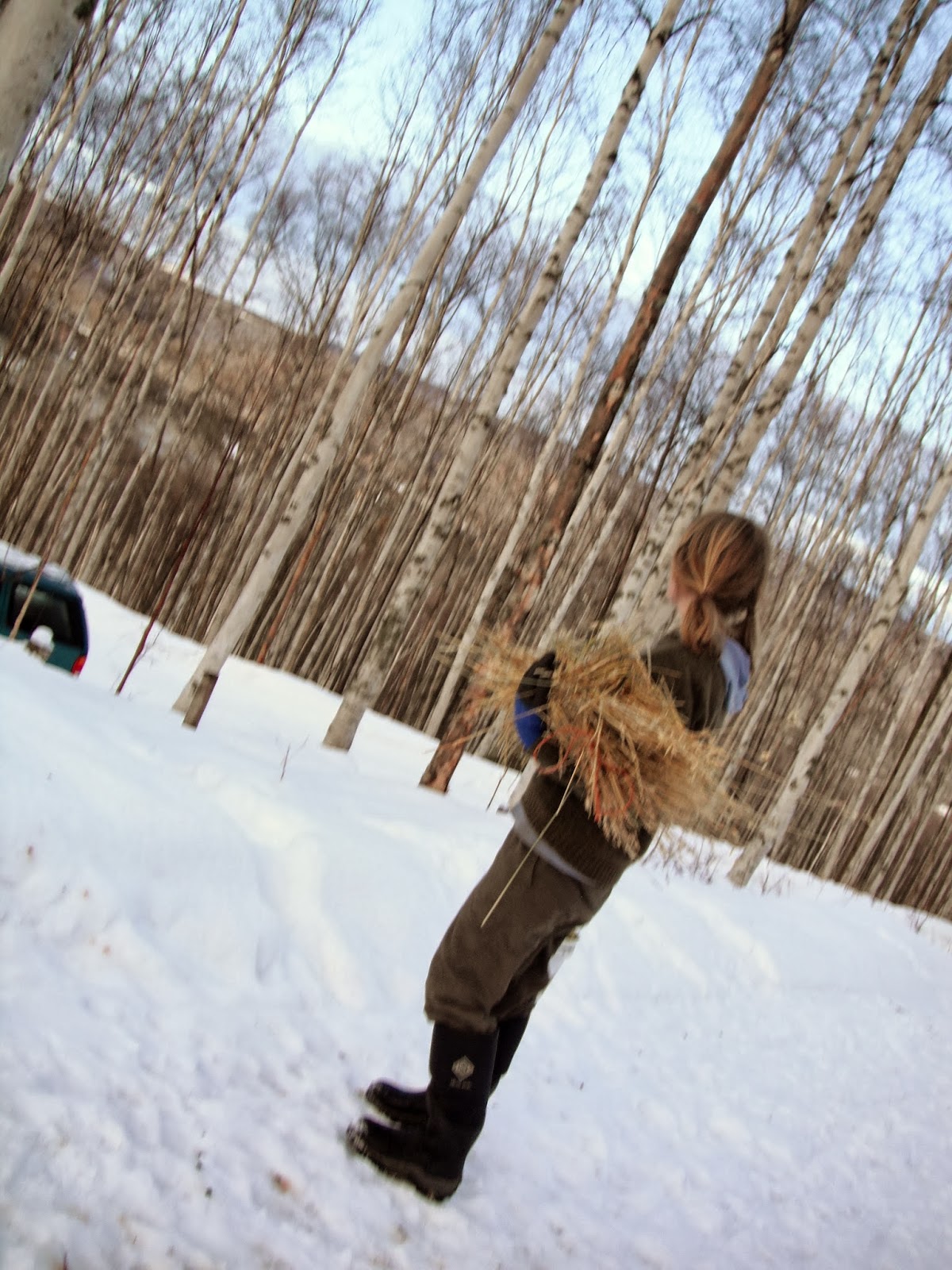