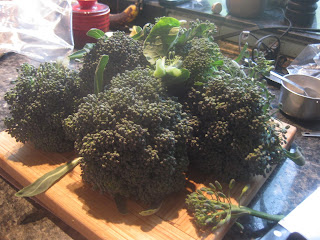 In my last post I shared a picture of some large broccoli heads. They are Fiesta Broccoli heads and while I've grown this variety multiple summers, I'm sure these are the biggest heads I've ever grown. Well above are the side shoots from the same plants, and they just keep comming!

I'm noticing a general trend in my garden this year and that is that my vegetables are bigger and producing more than they ever have before. I'd like to think that it is all the composted goat manure I've been adding each year. But in truth, the one thing I did differently this year than in past years is that I bought 2oo lb. of AK fish bone meal at 25$ a bag (which was a score and why I did it) and I spread that fish meal in every row before I planted this year. And that, is what I think has made all the difference.

I have a romantic notion of having a biodynamic farm; where all the nutrients come from our homestead and are produced by the animals we raise or by cover crops. On a biodynamic farm you don't buy soil ammendments, no fish meal, no kelp, rock phosphate or greensand, all weighing a ton and costing an arm and a leg for the shipping of it. I would like to think that composted goat manure, chicken manure and other poultry manure in addition to our garden and household compost would be enough. But what I am slowly realizing is that neither the clay rocky ground that is our reality, nor the peat mix we bought by the truckload and dumped on top of our clay rocky bed have the necessary minerals and nutrients in it, even with animal manure added. The soil is still deficient. The manure adds nitrogen. Over the years I've noticed phosphorous missing the most. Onions and garlic don't bulb up well and my peas don't produce well, unless I add bone meal which is high in phosphorous. Last fall I added bone meal to my small garlic bed and to the pea rows. Unfortunately I hadn't decided where to plant onions. As a result, my peas are doing great. I have three and a half gallon bags of shelled sweet peas in the freezer. I also harvested good sized garlic bulbs. But my onions are small and I'm wishing I'd bought another bag of bone meal when I'd planted them this spring.

We left town for six days to get away and do some fun things with the kids in Southern Alaska. I tried so hard to stay on top of the garden, especially the peas and zucchini up until the day we left. Yet we still came home to splitting cabbages, woody peas and monster zucchini.

Avery made sauerkraut. I thought she was just going to help me but she ended up doing it all. With the help of the food processor she shredded it, added salt and tossed it, and despite her mother telling her she probably didn't have the strength to pack it firmly enough, she went ahead and did just that. 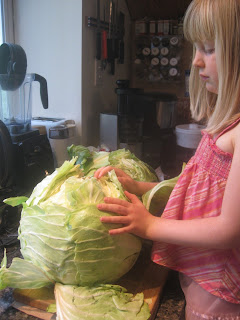 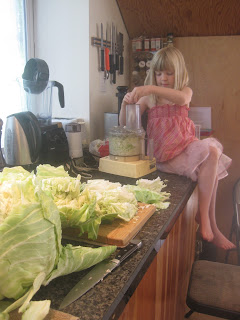 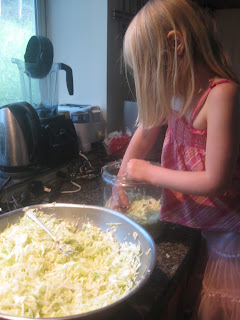 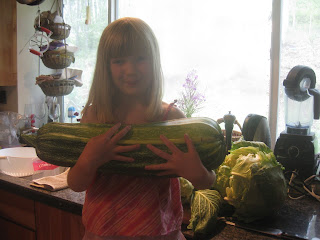 I've been thinking: where else do gardeners harvest and shell peas at the same time the sweet corn is ready to pick, the tomatoes and pepper are ripening and just about everything from zucchini and broccoli to cucumbers and onions are done and need harvested within the space of a month??! While I'm not complaining, harvest season is really and truly crazy here. I have shelled so many peas in the last couple weeks that my right thumb nail is separating from the skin and I had to figure out a different way to shell peas than rely on my right thumb yesterday. I'm picking raspberries, cucumbers, peppers, tomatoes, zucchini, fava beans, broccoli and romanesco every two to three days and trying to deal with them all. Next on the list, the basil needs pureed with olive oil and frozen because there is still plenty of dried from last year. I need to start blanching and freezing kale not because it's in danger of being nipped by frost, but rather there is just so much of it I'll feel good to put a dent in a few rows.

Low down areas could be expecting a frost any clear night now. Thankfully we usually have till early September before the squash, tomatoes and cucumbers take a hit here. However, I notice that with the cooler temperatures we are starting to get, more and more sixty degree days than seventy degree days, the tomatoes are about to be at the point where they ripen faster indoors than out, and the squash are beginning to stay about the same size. So, I'm guessing my heat lovers only have another week or two tops in the garden before they need to come in for safety.


Another dilemma I'm facing is that we have been storing our root crops in a friend's root cellar. But their root cellar is not usually cool enough until late September. So, I can't really get a jump start on harvesting any of the root crops which are already plenty big enough, because I have no where to put them. My second fridge is full of cabbages that were splitting.

Which brings me to my most recent epiphany; which is that considering that I love to eat fresh vegetables and would prefer to be doing so year round for health and taste, rather than eating them canned, frozen, dried, pickled or fermented (with a few exceptions), and given that we basically have an abundance of fresh vegetables for just a few months, I'm living in the wrong climate!
Ergh.

Well, despite already feeling overwhelmed by the garden, I still couldn't resist when a friend of mine was having a u pick sweet corn day at his farm. So the kids and I stopped in and picked 27 (someone miscounted- we were going for 25) ears of Yukon Chief sweet corn. It was a splurge and a treat. We grilled most of it and ate it on the cob or in fresh veggie salads. I realized after buying this sweet corn that my own is almost ready to pick and felt kind of silly for paying for corn when I had my own. But, how often do you get to walk through a corn field in Fairbanks Alaska?! And my own corn plot is very small. 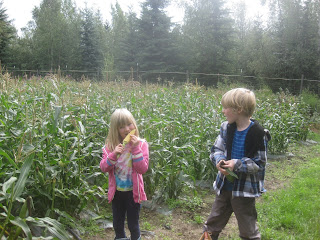 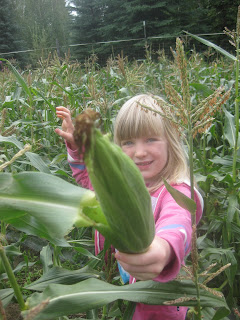 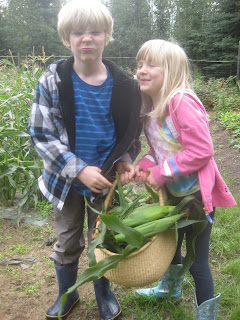 If the garden dries out and I'm able to hack through the weeds to reveal the vegetables, I'll share some pictures of the garden in my next post. Happy Harvesting!
Posted by Emily at 9:44 AM

I am totally envious of your garden! Fish bone meal you say. I will definitely need to look into that for next year. I've had obvious improvement in the areas where I added manure last year, but still have room for much more improvements. My broccoli plants in particular are huge, but only one tiny head, and no sprouts on the brussels sprouts, which I thought was pretty odd. We should get another month before frost, but I don't think I'll see yields like yours even then!

Keep up the good work!

Emily - I move away from Fbks last fall and miss it so deeply. I read your blog all the time and it makes me feel connected to that world. Thank you so much for sharing.

I often think that I am living in the wrong climate for my gardening aspirations - here in Western Spain we are in almost desert temperatures for at least three months of the year and the winter months (just Jan and Feb) can be very very wet and cold. Gardening is a challenge and I have not got to grips with it here... you, at least, can be thankful for having too much. I do recognise the panic though, the waste not want not mentality that means you HAVE to do something with all this produce... it made me smile. My soil here is very very poor and we are exploring additives - as eco friendly as we can get. Thanks for the tip about the fish meal. Keep posting, I love the contrast of your life to mine.

Oh my goodness! You don't know how bad i want to move to Alaska!! this just make me want to move there even more! (We are currently in Georgia :( and i hate it) I read that the veggies get so big because of so much sunlight in the summer. But who knows! stock the freezer and pantry!