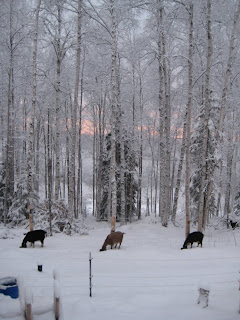 This morning is our coldest morning of the winter yet, about eighteen degrees below zero. We did have an earlier cold snap but with the thermal inversion the low lying areas got down to thirty below but we never got colder than ten below, big difference. Sometimes it takes a couple days for the thermal inversion to catch up with us as is the case now, but I hear that by tomorrow the hills should be significantly warmer. For now, I am really noticing the differences between our triple pane vs. double pane windows. Last night I heard the radio announcer say "It is going to be a bit chilly tomorrow, highs twenty to thirty below zero." Yes she really did say a bit chilly. And the weather report also said highs twenty to thirty below zero. It has been ten below the last couple days and as I was doing chores last night I could tell it was colder because my nose hairs and eye lashes were icing up, which doesn't seem to happen at ten below or warmer. We replaced the regular bulb in the coop last night with a heat lamp. It felt pretty cold and we've lost several eggs to freezing solid and cracking the last couple days. In the picture above the goats are tied up to their spots as they eat their daily grain. If you look closely you can see the sun hitting the far hillside which faces south. I took these pictures yesterday at about one p.m. This is about as much sun as we'll see in a day. 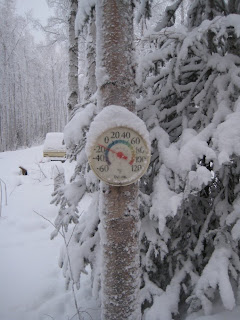 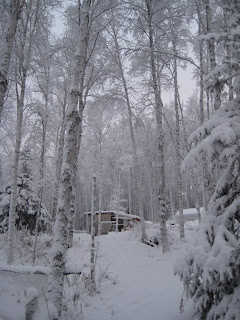 The above picture shows the path we take up to the chicken coop. The picture below is our driveway. 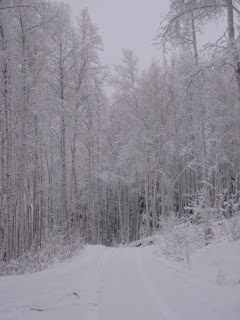 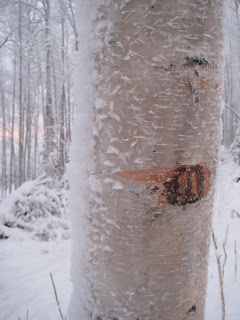 Huge ice crystals are built up on the west side of all the trees and shelters as with this birch tree. During our last warm spell I noticed that once the temperature reached the teens the frost disappeared from the trees, leaving behind a barren dismal woods. So, at least the cooler temperatures make for a lovely winter wonderland.
Posted by Emily at 11:46 AM