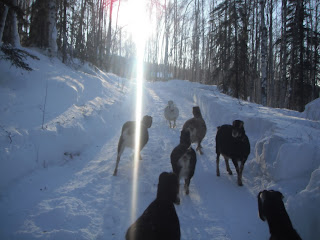 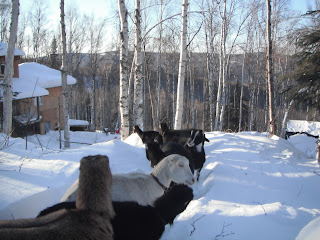 Over the weekend we got almost a foot of snow, which wouldn't be much to talk about if it hadn't been followed by severe winds for twenty-four hours! We ended up with drifts ranging from knee to chest high. On Monday morning Dustin spend a couple hours hand shoveling out hay structures and paths to the animals so they could be fed. By night, most the path was blown over again. We lost power for several hours and I was beginning to worry about the food in the fridge, and revising dinner plans when the electricity came back on. Our snow blower had died about a month ago and we'd been putting off replacing it. So, D ended up getting a ride down to buy a new one, filled up a can of gas, got dropped off at the bottom of the driveway and worked his way up. He spent close to eight hours today snow blowing our quarter mile driveway so we could get the truck out.
I got the does out for a walk this afternoon. They hadn't been outside much the last couple days with the snow coming down and a harsh wind blowing, so they were frisky and eager to be out of their snowed in pen. They struggled a bit with the path that was blown over, but they were troopers and were not about to be left behind. 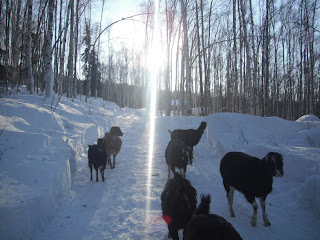 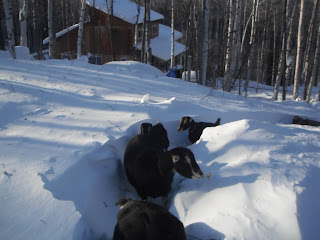 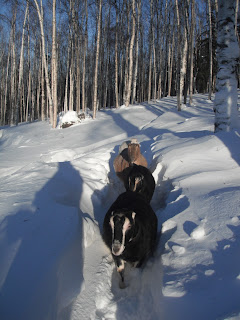 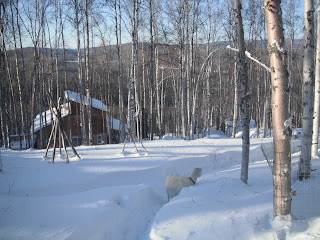 Rose lagged behind as she is due the second week in March and most likely has two to three kids in there - and she is petite. I tried to tell her she could wait at the bottom of the hill for us, but she trudged along faithfully. I love my Rose. 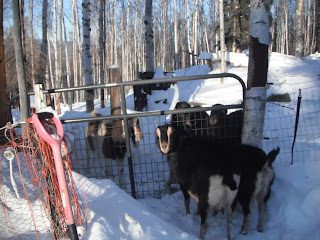 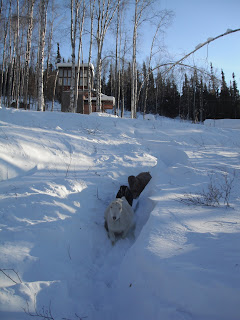 And back down the hill. Huff, puff, huff, puff.  A work out for all involved.
Posted by Emily at 9:08 PM

Dear Emily I love this post. It looks like a goat parade. All that snow WOW I feel for D. Take Care B

Emily, do your goats just follow you along? Do you have to call them or lead the head one?

B, I feel for D too. I was so thankful to be the one inside watching kids and making the food.

The goats follow along, I'm their "lead goat" "leader", so if they get ahead of me or go somewhere I don't want them to go, I turn around and head the other way and they come running. herd mentality I think.