A February day, and a walk with the Does

It is shaping up to be a productive day around here. We started off the morning with a friend stopping by before work to breed their fourth and final doe to Zanzibar. I was able to get morning chores done early and out of the way before D headed off to work. The kids and I had oat pancakes with warm homemade applesauce and honey (which was given to us recently by a friend, light and mild, very nice). Now I've got bread dough in the mixer, chicken stock simmering on the stove, and the wood fire burning pleasantly.  To top it off the kids are in good spirits and playing independently. Noah is dressed up in a dragon and a knight costume,  body of a dragon with knight cape, helmet, shield and sword. Avery never wears one thing for long but she has been alternating between a purple tutu, pink fairy wings and pastel silk scarves. I love hearty breakfasts that stick with us through the morning. Nothing like needing another meal by the time I've cleaned up from the previous one.
No great ambitions today. The temperature has been warmer, in the twenties. So I'll get the kids out after lunch, clear some snow, fill the bird feeders and take a few does for a walk. I pulled out a chunk of beef to thaw. I've had a serious beef jerky craving. We need to invest in a side of cow. We haven't had much beef lately as it is pretty expensive, especially since we've been buying it at the local meat market, (not feeling up for a big investment in a beef box).
I've also been in the mood for Indian food. Last night I made a green chicken korma, chicken simmered in a fresh cilantro, mint, nut/coconut sauce. If I'm feeling adventurous this afternoon I think I might make some potato samosas and a mint cilantro chutney. I've been buying one bunch of fresh cilantro every shopping tree. I have a productive pot of mint with the houseplants. I think I miss fresh green herbs more than anything in the winter. Which is one reason why I'll be starting herbs from seed in the next week or so. Some herbs like lavender, rosemary, thyme and oregano take forever to get going. Others like cilantro, parsley and basil are quicker growing. I like to succession plant these later herbs. Start some now with the plan to transplant them and snip at them through the spring. Then I'll start another batch closer to summer. I sow cilantro direct in the greenhouse as well.
It is looking pretty gray and dreary around here. I'm ready for some green, even if it is just in the kitchen, or under lights indoors. The light is coming back though, and busy days are right around the corner. Here are some pictures from our walk yesterday: 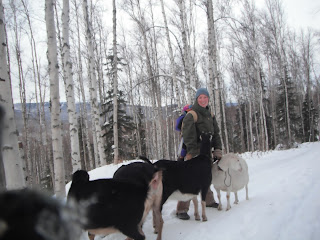 I'm holding Rose on my left and her daughter Zinnia on my right. Both are due in early March. 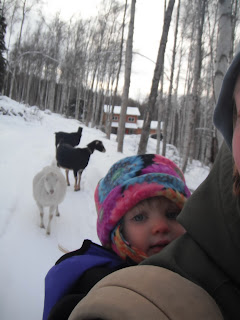 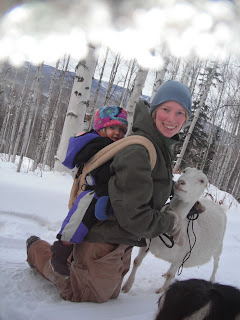 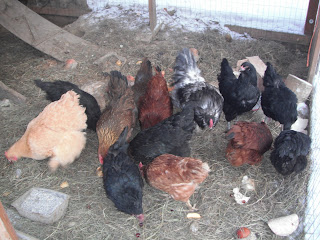 Healthy looking chickens for all they've not seen the sun since November. Blue Ameraucana Rooster in the center, Honey our Cochin on left, Welsummer hen, black Sexlinks, red Sexlinks, black Ameraucana hens, and a couple Rhode island reds. We are getting four to eight eggs a day. Our Welsummer hen that lays
the darkest eggs is not laying eggs presently. 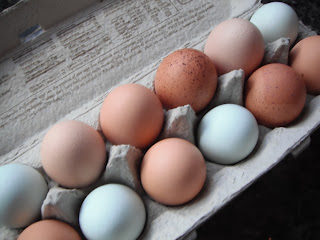 Labels: chickens, does, eggs, February days, in the kitchen

Emily It looks like things are going well with the goats.The chickens look great and that is a good amount of eggs.
To bad about the beef I know the prices are higher, that is what we raise But we finally made a little profit this year first time in 15 years.
I love your description of the food you make it sounds so inviting.
I am sure the dragon outfit is cool.
Spring is getting closer.Nice to get outside. B

Emily, I found your blog about a week ago, and have been inspired so much by you, and all your doing. I love seeing the pictures of your pregnant does and baby on your back and child by your side taking a walk.

I have 5 children 10-20 years old, 4 girls and 1 boy. I had kids in backpacks for 12 years. We garden, have chickens, rabbits and honeybees, orchards, and will have 3 Nigerian dwarf goats (does) coming this spring.

I see all you're doing and writing and applaud you and the time you spend on quality lengthy posts that teach others valuable information ie. your kombucha one...wow, good job!!! And all the cosmetics you make! I want to do that! I haven't looked at all your posts, but the ones I have seen are great!
Thanks, Jewel

Buttons, we've been fortunate to be given beef by my folks who have bought whole cows. The supply has been dwindling though, so for the first time in a few years are finding ourselves in the mood for beef, but have none on hand. I bought one large ribeye and one small arm roast to make into jerkey and spent almost fifty bucks! ouch! We've got some friends who raise beef cows, we just need to get with them.


Jewel, I love hearing from moms on similar paths. I tend to feel isolated and alone in my daily routine and yet I know there are moms everywhere wearing (or who wore) their babies on their backs while cooking and doing farm chores. I need to connect with more of you. Thanks for connecting. Emily