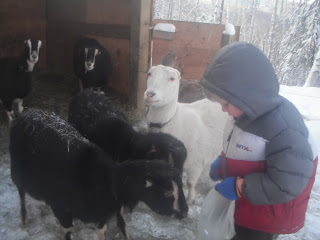 Here is Noah feeding asparagus ends to the goats. I've been wanting to write about goat behavior and small children. When families start looking into getting a family milk goat, one of their first requests is that the goat is friendly and compatible with their children. There are several factors that go in to how a milking doe behaves around small children.

First let me back up a bit and explain general goat behavior. Goats are herd animals and they all have their rank and position in the herd. The does often challenge and test the other does in an attempt to move one up in the herd. They do this by lowering their heads and charging and ramming the other doe in the head until one gives up and runs off. When goat kids are born to a doe, if she is a good mother she will keep her kids close to her and try and protect them from the other does. As the kids grow and merge into the herd, the other does will ignore the new kids, until the kids approach a doe who is not their mother. They are quickly put in place by the does who are not their dam. They quickly learn to stay away from the other does.  Some does are worse than others about bullying the younger goats and some aren't so bad.

The does view me as their leader. So far they tend to view and treat my children as they view the other does children, which means they are up for challenging. Only one of the most daring senior does tends to have the audacity to attempt to knock over my kids. There is one other doe who looks as though she is thinking of trying. By attempting to ram and knock over my children, they are trying to put my kids in place and let them know who is boss. Yelling, scolding and physical discipline does not seem to work, and it may make matters worse. When the children and I spend time with the goats I tie up the two does who may challenge them. Then the kids come in and spend time with the goats. Another idea I got from a fellow goat owner, is to give Noah a squirt bottle with water. He is only to use it if one of the problem does is lowering her head or looking like she is going to push on him, then he squirts her until she turns away. This summer we kept a small squirt bottle outside the doe pen. Noah wouldn't enter without it and was able to move about and spend time around the goats without getting knocked over. 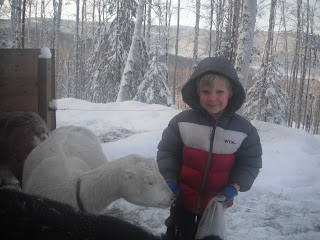 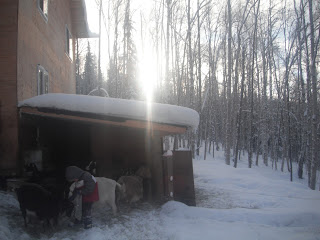 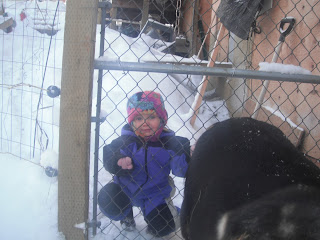 I do not let the children enter the goat pen without me. I have learned that although I think I'm quick enough to stop a doe from knocking over the kids, I'm not. All it takes is for me to turn away for a minute and one of my kids can be flat on the ground crying. So I always tie up problem doe now. I have not noticed that this doe is more aggressive with other kids. But most of my does have not challenged my children. However, if they ranked higher within the herd, they might have the confidence to try.

I would suggest to anyone introducing a new milking goat to their children, is to prevent any challenges and behavior patterns from being established. So maybe start by holding the doe while small children brush or feed her treats. I would not let children run wild in the pen with the goat, or kid goats for that matter. This is a mistake that I made in our first summers with goats. When we first had goat kids shipped up, Noah was one year old, the pen was new and not poopy yet. He and I spent a lot of time with the kids, bottle feeding and he would crawl and toddle around with the kids. The second year when kids were born I would let him run around and play with the goat kids. This reinforced his kid status with the mom goats. It was about this time that the first mom decided to put him in his place, and it has become a pattern ever since. So, spending time handling, petting, holding, brushing and feeding treats to kids is a good way to get them use to children and people in general. Letting your kids run wild and be rowdy around the goats is not a good idea!

Our milking does are well behaved and sweet for the most part. The know their routine. They expect and appreciate routine. They are also herd animals and opportunists. 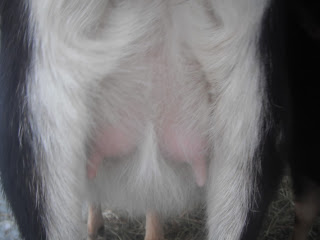 This is Zinnias forming udder. This will be her first kidding. She is due in a couple weeks. It is exciting to see a new udder taking shape for the first time. 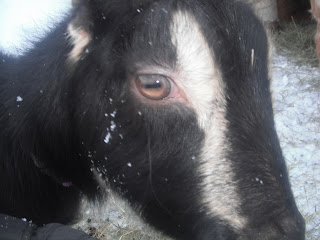 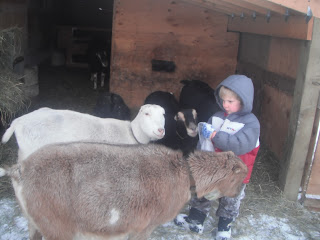 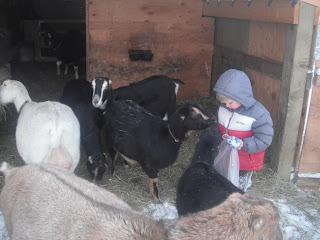 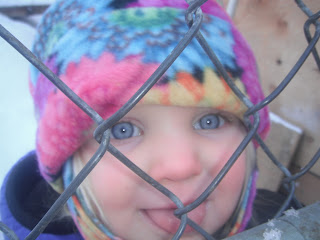 We are planning to buy two female kids in the spring to let them get used to our children while they are very young instead of buying two adult does. Do you think this will be helpful?
Thanks so much for sharing your knowledge and experience,
Tonya

Tonya, I think that if you have the patience to wait a year or two for milk,then starting with doelings certainly helps with bonding and establishing positive relationships from an early age and not having to deal with behavior issues that older does might have. As I mentioned, discuss with your younger kids, not being too loud and rowdy around the doelings, and resist rough housing as you might do with dogs. You don't want the doelings to think of your children as fellow goats. You do on the other hand want to get the doelings use to being handled, pet everywhere, hooves handled etc. If they are skittish and wary, don't think that giving them time to get use to you will necessarily work. Pick them up anyway, hold them securely, talk softly and only set them down when you are ready. This is what I've learned by trial and error with our goat kids.

Very sensible advice about goats and little children. I enjoy reading about your goats so much! They are lovely ladies! Zinnia's udder is looking good! I've got two due in mid-April - no udders forming yet, but they are getting awfully wide.

Emily We used to have goats and one pet one.She was very jealous of my daughter going as far as ramming the stroller. She could be quite mean we always had to watch our little visitors or she would knock them down. Her name was Franny.Great post. B

We have 2 15-mth-old does that we are going to use for milking next year; we've had them for a year now. One of them is very aggressive towards my daughters, even my 15yo, but especially my 7yo. She has even tried to ram me but I hold my arms above my head and try to make myself look really big. (She stops and runs off, but tries a little later.) I am worried about my 7yo though, to the point where I am thinking of getting rid of this doe; I'm wondering if she will be even more aggressive as a mother.

Sage, your doe will most likely continue to be more aggressive, and yes, especially when she has kids to protect. I have not had much success getting does who already show aggression towards my kids, to revert to non aggressive behavior towards them. However, I have been sucessful at keeping the younger does from starting out on that behavior path. Intimidating and scaring the goats does not seem like it will work in the long run. Personally I would get rid of the aggressive doe - I have yet to have one that is that aggressive. Best wishes.